Everything you need to know about Progressive Web Apps

In 2015, Google went public with an exciting new approach to app development which they theorized, would indicate the departure from a limited functionality and platform-locked design that was common in the industry. This new method is known as “progressive web app”, or PWA.

This concept brought the combined experience of the web with native apps best qualities. For those who can remember the dreaded “mobile web,” the idea that there was to use the Internet on a mobile platform in a better way – without involving a native app.

PWA (or a Progressive Web Application) is an app displayed as a website within your browser, It’s not something which you have to download and install it from Google Play or the App Store.

So, what are Progressive Web Apps exactly?

A Progressive Web App is based on the idea that the Internet, with mass adoption of HTML 5 and similar web development languages, has evolved and moved forward. It has matured to a point where PWAs are capable of providing similar functionality with a seamless user interface which is found in the best traditional native apps via a direct mobile experience. An experience which was previously very hard to provide.

This shift in approach also brings many changes along with a few benefits for not only for the companies and but also individuals who currently develop on mobile platforms but also for their clients.

When are PWAs better than native apps 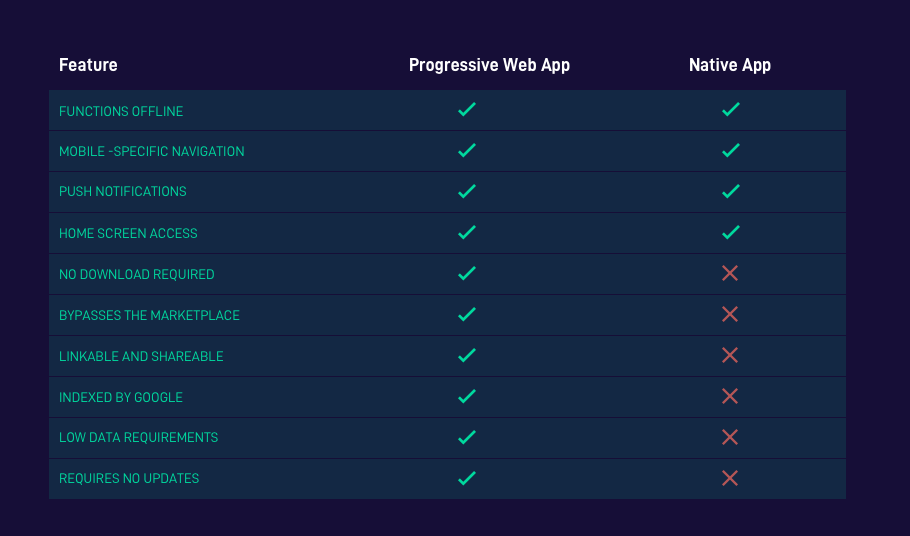 The most important and most apparent advantage of using this approach is that the developers will no longer need to develop multiple apps across multiple mobile platforms. Even for those who develop only for iOS and Android, thus it will save app development time and effort. PWAs offer the promise of being able to develop a single app which will work perfectly across all your platforms and devices. 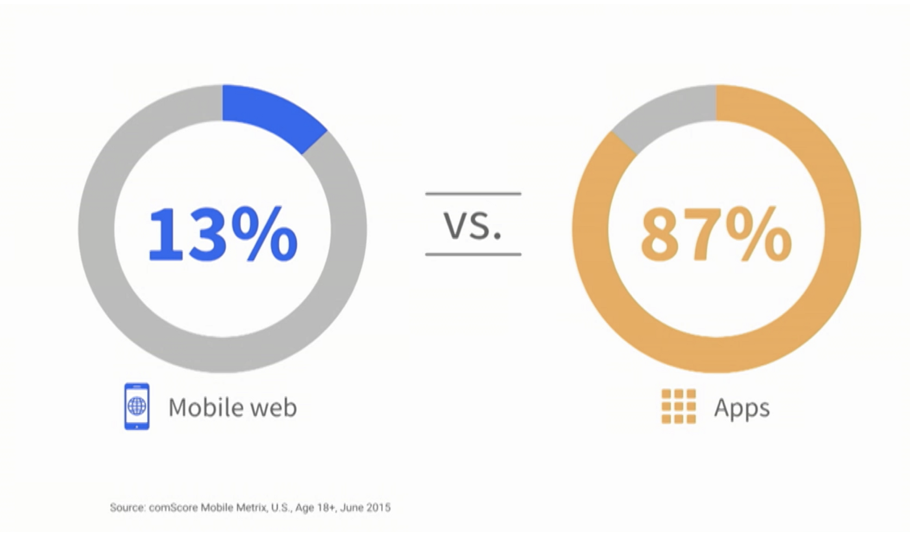 A progressive web app can help a business increase its reach across all desired platforms with relatively less development effort. In a market where competition is increasing on a daily basis, the ability to expand your market reach faster than the competition can become a decisive advantage.

Unlike its native counterparts, PWA does not require installation prior to usage. In some accounts, the additional click required to get an app running results in a user drop-off rate of around 20%. This high rate of attrition prevents the majority of potential users from even trying a native application. We know this because most of the apps in the app store have never been downloaded.

When was the last time you used Facebook and opened an interesting link shared by a friend, only to have Facebook shunted aside while your browser opens up the link you clicked on?

Chances are that it wasn’t that long ago. From a user’s perspective, one of the most notable benefits of progressive web apps is a vastly improved cross-functionality. What it effectively means is switching between the apps, and sharing information between them have becomes less intrusive or frustrating. Instead, it’s now much faster and more intuitive. Basically, it’s like accessing Facebook Instant Articles or an in-app browser for Slack.

Whether working on an app or on a website, the quality of the code matters the most.

If you think this is the end of the line for native apps, It’s not.

While PWAs offer various advantages over traditional apps, it is still early to count them out of the game. The native apps have become the dominant force on mobile platforms for a very simple reason that is web experiences were simply not effectively adapted for them.

While the tide has started to turn, but it’s still early. In 2016, native applications accounted for approx 87% of all mobile internet traffic. That’s a large entrenched user-base of the market. Companies that already offer apps on multiple platforms may not feel the pressure to aggressively pursue a shift to web-based app development.

Keeping the inertia aside, many developers are very well familiar with the multi-platform native app development and may be resistant on changing their development processes and workflows in such short term. Current platform devkits and APIs offers great functionality to those providing web design and development services.

Finally, PWAs – despite their benefits – do have a number of issues that need to be resolved before they can claim to offer a superior alternative to native apps.

Progressive web apps have their limitations when it comes to offering integration with a smartphone or tablet’s hardware features like NFC and Bluetooth as well as the device’s sensor package (accelerometer, fingerprint sensor, etc.). These shortcomings prevent PWAs from being developed for use with mobile accessories and “wearables” devices like smartwatches, fitness trackers and wireless earphones.

For the time being, when it comes to fully use the mobile device’s hardware capabilities, native platform-specific applications still top the charts.

PWAs Can Help Your Business 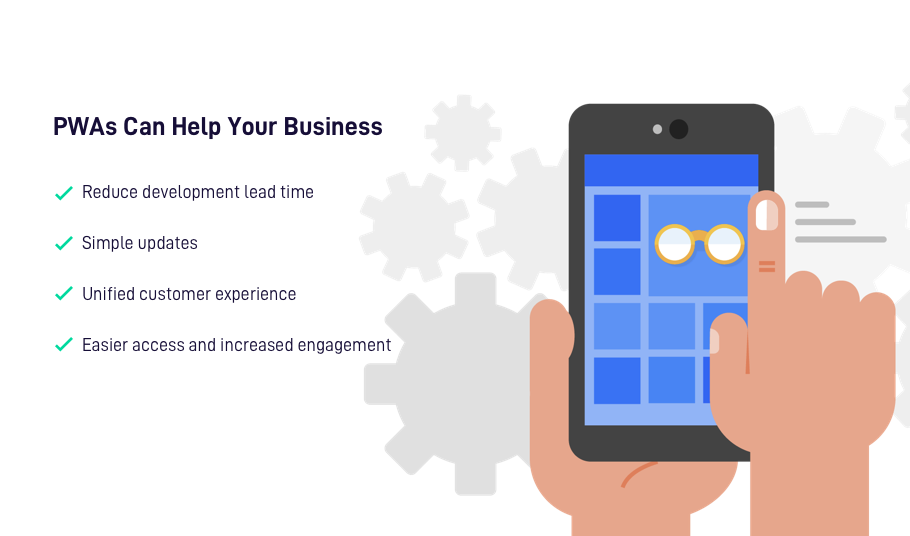 If you don’t have enough resources to build your native apps Android, iOS, and web apps can sync with each other, PWAs can be a good option to consider and they surely are quite important for website’s traffic and reach.

As impressive as it might all sounds on paper, what matters the most is whether it delivers where it counts that is by helping your business better connect with and serve your customers.

We have discussed a few of the advantages that progressive web apps promise, Following are the list of key benefits that a company can enjoy by using PWAs as a big part of their strategy on mobile platforms:

As we have mentioned earlier, the biggest benefit of PWAs is the fact that you will only need to develop a single “platform-agnostic” version for your app and make it accessible to all the potential users, no matter what device they are using.

You will find this article useful: Should I Hire a Freelancer or an Agency

As there is no app to be downloaded and updated every time you make changes to your services, a progressive web app will keep all your users up to date. It enables them to immediately enjoy the latest functionality, features, and security updates without the need of updating the app. Using a PWA largely solves the problem of software “fragmentation” that may force a company to extend legacy support to the old versions or risk cutting off sections of the user base unless they initiate an update.

Replacing the native apps with PWAs means that all your customers have access to the same version of your app. This uniformity across platforms will make sure that you are able to consistently deliver a powerful and optimized user experience to your entire user-base.

One of the biggest challenges in web design is to provide the user the content, information, and experience they need, by using the fewest number of steps. This is the segment where PWAs really shine. They require a minimum effort to provide what the user needs. They offer a complete user experience on mobile without any need to download and install an app.

This simplicity and ease of access lead to an increase in the level of user engagement. PWAs developed by the Washington Post and Aliexpress (Alibaba) have resulted in a huge improvement in the rate of engagement – as much as 5 times in the case of Washington Post, and 82% increase for Aliexpress users on iOS. It is especially noteworthy, given the fact that iOS doesn’t really support Progressive Web Apps.

As PWAs can still launch from your home screen and provide the experience and user interface which is very similar to their native counterparts, there’s very little opportunity to discourage users from making the switch.

Of course, being listed on the App Store or Google Play is still a very important part of building and maintaining visibility for your apps. However, PWA offers a far greater level of freedom for platform owners who are attempting to build “walled gardens” on which they serve as gatekeepers. There are still numerous challenges to overcome but It can’t be denied that Progressive Web Apps offer many benefits over their native counterparts.

By the way, we can build your PWA or a set of native apps. Feel free to reach out us [email protected]