Top Node.js Development Trends to Watch Out in 2021 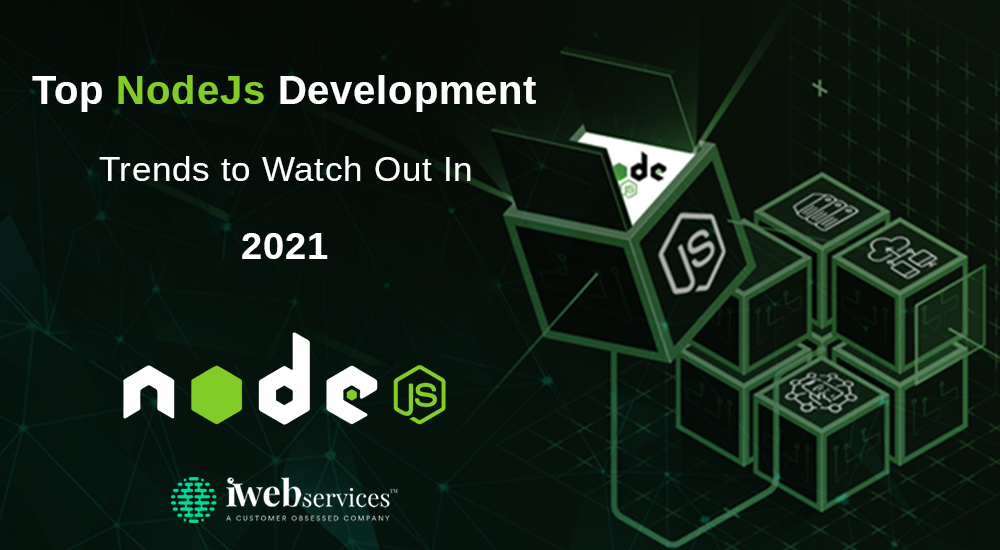 Node.js is an open-source JavaScript runtime environment built on the Google V8 engine. Recently, it has emerged as a sought-after technology for developing scalable applications. The big players in the market like Netflix, Linked In, Walmart, Yahoo, Uber, eBay, and many other businesses from all across the world have been using Node.js to build applications and grabbing the attention of the users with its amazing performance. In this blog, you will get an idea of how Node.js stands in terms of acclaim now and what are the most prominent  Node.js development trends in 2021.

Node.js Frameworks has become essential for businesses seeking forward-thinking ways to connect with their audience. While the folks are depending a lot on the software applications for day-to-day functioning ranging from regular ones to intricate tasks, businesses are trying their level best, for making client engagement fruitful. One of the foremost things to be done for building an appealing application is to choose the right framework to craft the same. The app developers who are aware of the contemporary trends and technology using some of the finest. And according to the numbers of early 2020, it is noticed that 51.4% of the developers utilize Node.js in their current projects.

The research has brought about some positive results

The developers have been working on and researching Node.js for a while now. They have made a dynamic client base and are building and designing effective websites using Node.js. And henceforth, most of them are not thinking twice in this regard. The ones who have lately tried Node.js, their effectual features have impressed them like anything, and they are sticking to it. It is because of the positive results, some of them have not failed to predict the trends, which will be going strong in the current year 2021.

It is an enormously valuable feature of Node.js which disregards the main factors like Hardware and aids a developer to fashion their application short of worrying about server upkeep. The lesser the dependence on hardware and server lesser is the rate and maintenance too. It will massively improve the quality of productivity with a considerably high reduction in cost, recyclable code modules, and enhanced quality of the codes.

This world can be easily termed the world of digitization, and there is a need for real-time applications. They need lightweight processing with a strong backend and data-serving platform. The foremost challenge for them is to evade the congestion of the server. But, with the use of Event API and Web Stocks cooperative communication is abridged. A lot of real-time apps are driven by coding from Node.js. There are a lot of aids to having a real-time application like video conferencing apps, online gaming apps, chatting apps, etc. All these apps have a lot of usage in the current scenario and make the life of people, a lot easier than before.

The Internet of things has taken all people by surprise and has also added a new dimension to the way that the internet is used. Node.js is used by almost all IoT Applications. A Node.js development company helps to deal with microservices, real-time applications and turns out to be the perfect match for the fashioning of IoT applications.  With the use of lesser memory and with reduced requirements on the server side it is working very competently. They are very much advantageous for tracking and real-time features accessible in the application.

Scalability is one of the prime features of Node.js. A Node application encompasses many small distributed nodes that communicate with each other and give an improved output. Node’s cluster modules make available the intellection solutions to use full power from the CPU and as well helps in snowballing the accessibility of procedures and correspondingly provide an opportunity to restart the whole application with absolutely no downtime to deal with.

GraphQL is a data query and manipulation programming language of API which was revealed in 2019 by Facebook. It is still emerging and is a prevalent feature sandwiched between developers even today. As it lets you gather a good amount of data from numerous sources and styles the workflow of the application smoothly on numerous devices like Android, Windows, and iOS.

Cloud solutions are feature-rich as they have the competence to scale inevitably as per the growth of the user base. And as the businesses are moving in the direction of Cloud for better performance it becomes inevitable to look at the user end and server load. It brings ease to integrate features for generating cloud-based applications and grading the ones, which are already present.

Node.js framework generally decreases logic repetition and can be used by more than one application. Web development has been pretty easy with the usage of Node.js codes that are companionable with numerous other applications henceforth it decreases the time to type the code for every application.

Coming to a Conclusion

With all these facts, statements, and trends, this is clear that Node.js is one of the trending JavaScript frameworks with its increasing popularity and long-listed features and efficiency. However, in case, if you are thinking of leveraging the powerful features of Node.js for your web development goals you can hire Node.js Developers from iWebservices. There is no need to wander too much when you come to us. We have a passionate and competent team, always trying to deliver the best results at the most competitive prices. If there are still any doubts hovering in your head, the reviews and feedback posted by the customers can help you decide. One thing which is given is that you will not be disappointed with the results.