Mobile applications though seems extensively easy to use, it isn’t so when it comes to developing them. A plethora of steps, strategies, and techniques before you actually have an app live on the play store. Starting from ideating to designing, developing and testing, the mobile application undergoes a series of skepticism. Of all these, one area that has always been a matter of debate is the design fundamentals of an app.

The two most important aspect of app design, User Interface and User Experience are two distinct elements with separate significance. Yet, many a time, the two have been thought to be ideally the same. Well, the confusion behind the two is seen to stem from the similarity in their tools, it is desirable that a clear image is drawn.

What Is User Experience

The term as it says is the experience a user entails while using an app or for that matter performing a task through an app. Developing an app from the perspective of a user is what improves and enhances the user experience. Developers lay immense importance on the needs and wants of the users so as to build apps keeping in mind the experience drawn by a user.

The user experience would integrate all elements having an impact on the interaction of a user and the product.  Right from the influential and effective to the practical characteristics of human-machine engagement, User Experience layers itself on top of the expectations a user has from a particular brand or a company. When you are trying to build a new organization and mediate the same through apps, it is highly desirable that your app provides a seamless user experience.

From the first integration to search made and product of service requested, the app needs to be self intuitive so as to lead the user from start to end. At no point of time, should a user feel disconnected or isolated? Here, is where you need to connect different modules so that the app is user specific creating a long-lasting impression. 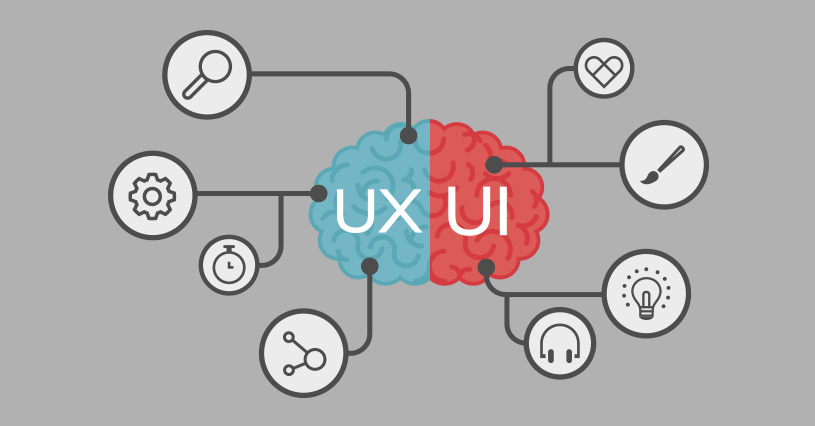 What Is a User Interface?

In contrast to the above, the user interface is more than just a set of icons and buttons in your app. It is primarily a channel tailored to render the functioning of an app. Where few belief UI to be the appearance but in reality, it drives the app. User interface elements determine how and when a user would perform a particular task. It is extremely important that the interface is skillfully designed. Placing icons or buttons in the wrong place might lead to loss of user interest and app drop out.

An efficient interface is one which is simple enough for users to interact. Few consider UI needs to be extraordinary so as to attract users, others believe that simple the interface higher is the interaction. In layman’s terms, User Interface is a user guide across the app. In case, an app has a poor interface, there is a possibility of the app being doomed to failure.

While both have their own set of importance, it is the user experience design that is done first followed by the design of the user interface. The UX designer would first draft the flow of data through the app and then this is used by the UI designer to blend it in the real world. Lastly, it is important to note that neither of them could thrive alone, UI accompanies UX and vice versa.

Ryan, in his role as Sr. Tech Consultant, has proved himself to be someone with a wealth of knowledge in Techno-Marketing function. Ryan enjoys writing about technology that simplifies its usage for any business. A vivid blogger by passion, Ryan enjoys contributing to various communities and groups.