Hybrid Apps vs Native Apps: Which One is better?

For almost a decade, mobile applications have been the epicenter of innovation. With the growing popularity of smartphones, many businesses are incorporating mobile apps into their workflow to broaden their market reach.

Whether to construct a native app or a hybrid app and which one would be better for the firm depends on its functions and typical difficulty businesses encounter.

The following things influence the answers to these questions:

What is a native mobile application?

A native mobile application is software that has been designed specifically for a platform or device. It can leverage device-specific hardware and software because it was designed to run on a certain mobile device and operating system.

In contrast to mobile cloud apps or web apps, which are designed to be universal across many devices, native apps provide increased performance and exploit the newest technologies, such as Image processing.

Native mobile apps are simple to use and offer a great level of precision. It makes things faster and gives users access to all of the native user interface (UI) features and layouts.

What is a Hybrid Application?

A hybrid application incorporates aspects of both native and web apps. The application is created in web technology languages such as HTML, CSS, and JavaScript and then condensed into a native application.

As a result, it functions similarly to a web app and is installed on a device similar to a native app.

Hybrid apps have entire access to the mobile device’s functionalities thanks to internal application program interfaces (APIs). Because native apps are downloaded, they can be used offline, whereas hybrid apps cannot.

Because it is primarily based on a web app, a hybrid app usually includes capabilities similar to a web app. Web applications are created for various platforms and are accessed via the Internet via a web browser rather than being installed on the device.

Hybrid apps are often associated with mobile computing. This technology allows data, voice, and video to be transmitted through a computer or any other wireless-enabled device without a physical connection. It is primarily concerned with mobile communication, as well as mobile hardware and software.

Hybrid apps make up the majority of the apps on the market.

Based on the length of time and the cost of development

Hybrid apps are the most cost-effective and take the shortest amount of time to produce. Hybrid apps are also simpler to manage. After all, they only have one code base, whereas native apps have numerous codebases because they cater to each platform separately.

Based on User Experience

Native apps provide the best user experience because they are specifically created for a specific app store. Native programs take into account both device capabilities and screen size. Compared to hybrid apps, it is impossible to provide a satisfying user experience with only one code base for all platforms.

Native apps are recommended for businesses who want to publish a premium app on the App Store since they offer a great user interface (UI), but free apps can be built as hybrid apps.

Whether or if your app will be available on App Stores

If a company wants to distribute an app through the App Store, it must produce a mobile app rather than a mobile-optimized (RWD) web application that can be accessed through the device’s web browser.

Is any native device functionality going to be used?

If you want to use the camera or GPS on your mobile device, you’ll need a native or hybrid mobile app, as a web app won’t be able to access those functions.

Each way has advantages and disadvantages, but in the end, a native approach will provide the most benefits to a company’s bottom line.

Both hybrid and native systems have clear and distinct advantages and downsides, which is why this debate is still relevant.

The largest disadvantage of hybrid apps, however, is that a corporation will likely spend more time correcting and customizing the app as a result of user complaints about UI components or performance difficulties in the long run.

Native apps also benefit from having functions specific to the OS on which they are created (e.g., camera, GPS, address book, etcetera). Furthermore, a native approach provides the best in class security, performance, a highly responsive user experience, and access to all native APIs for a mobile application.

To put it another way, while the initial expenditure may be expensive, the company will save time and money in the long term while providing a wonderful user experience and industry-standard app performance.

Looking to hire mobile app developers for your app development project? iWebServices is known as one of the best app development companies in India recognized by DesignRush, which leverages cutting-edge technologies to create business-friendly mobile apps. 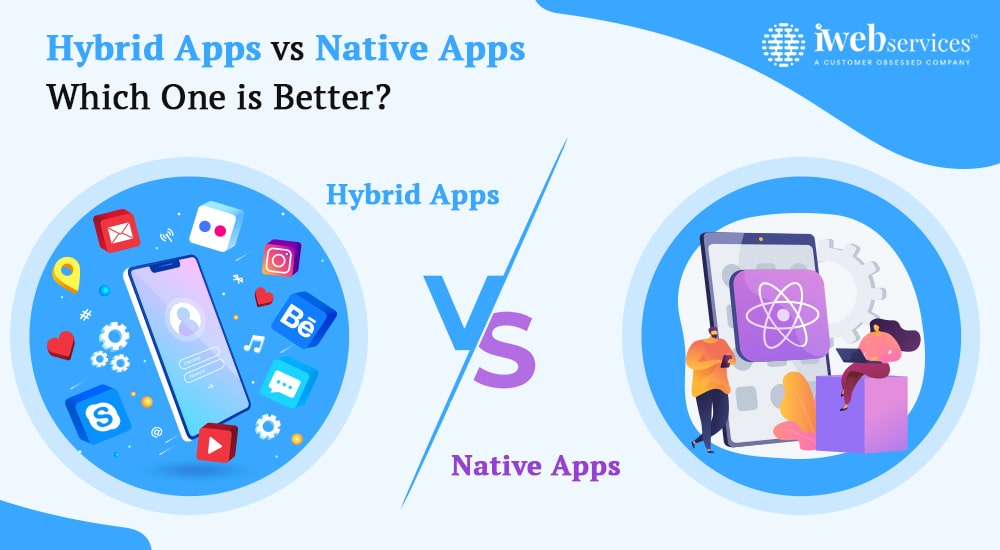 Sales Management with over 8 years of experience training and supervising sales staff while planning and implementing sales strategies over a multi-state territory. Outgoing sales professional with a track record of driving increased sales, improving buying experience, and elevating company profile with the target market.