MEAN Stack Vs MERN Stack: A Comparison Between the Two Tech Stacks 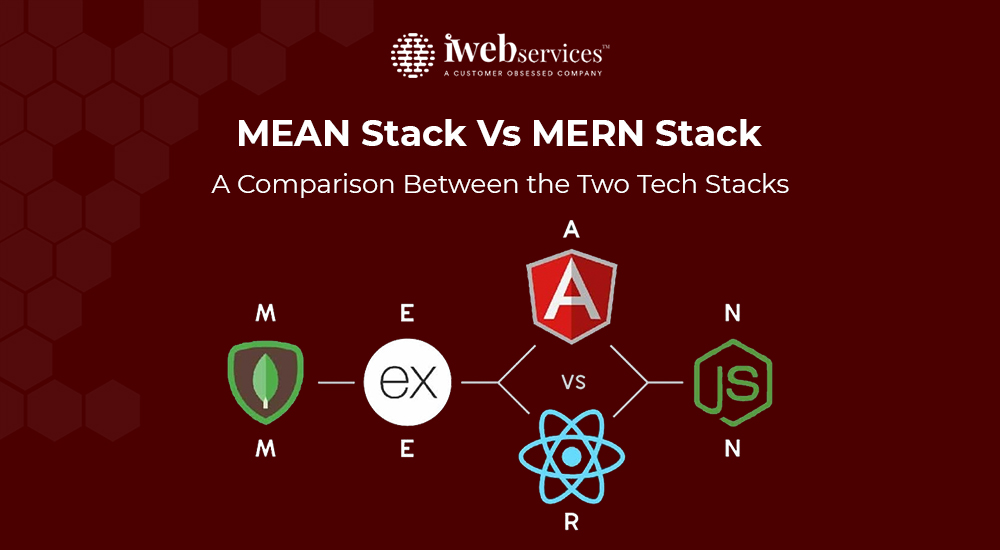 A technology stack is a collection of programming languages, frameworks, and technologies. A technological stack ensures an integrated and continuous development process, giving any project the appropriate balance and flexibility.

Separate developers used to work on CSS, HTML, and JavaScript separately. However, thanks to a variety of tools and software solutions that function well together, a full stack developer can now manage everything from frontend to backend, database to the user interface.

The LAMP stack, which was the first open-source full-stack development package that included the capabilities of Linux OS, MySQL DB, PHP Programming Language, and Apache Server, gave birth to the word “stack” in web development.

The MEAN and MERN stack development services appeared after the LAMP stack. These are the two high-demanding technological stacks that guarantee a solid, vibrant, and skilled software project execution.

When it comes to choosing a comprehensive technological stack for a web or mobile application development project, the MEAN and MERN stack development is frequently compared.

The MEAN stack is a set of algorithms that calculates the average. MEAN stands for a full-stack JavaScript framework for building sophisticated websites and web apps. MEAN is an acronym for the four technologies that make up the application: MongoDB, Express, Angular, and Node.js.

It combines the most capable tools for mobile and web application development to make things easier and faster, making it a popular choice for businesses looking for a technology stack that uses many plugins and reduces system administration time.

MERN is also the open-source technological stack, which consists of the JavaScript-based frameworks MongoDB, Express, React, and Node.js. This chosen technology stack aids in the building of a highly efficient end-to-end framework for web development, allowing online and mobile applications to be developed more quickly and easily.

Explaining the differences between the MEAN and MERN stacks

MEAN and MERN stacks are comparable in that three of the four components are the same.

MongoDB is a NoSQL document database that allows multi-cloud data distribution by storing data in the JSON language. This is a safe bet. This one makes data visualization, manipulation, and sharing a whole lot easier.

Express is an open-source backend web application framework. Node.js takes advantage of it. Express is a popular framework for constructing online applications because of its great efficiency, flexibility, and simple nature. It is well regarded for the creation of a robust collection of features.

Node.js is a JavaScript open-source runtime environment that allows you to run code outside of the browser. Multiple connections can be handled by a single Node.js server. Its performance is good due to its asynchronous event-driven nature.

Angular is an open-source web application framework that is backed by Google’s TypeScript. It makes it simple to run code in the user’s browser and create UI components. Facebook developed the open-source JavaScript library React. It aids with the creation of user interfaces for mobile applications and single-page applications.

Both of these stack components provide a wide range of features that are essential for the successful deployment of any online project. Looking at the different advantages of the MEAN and MERN stacks, one may better determine which one is best for properly and successfully developing any software application.

A framework for javascript. Data flows in both directions. Mobile applications are not supported. It’s now easier to manage and render code. There is a significant learning curve if you learn about MEAN stack development services.

MongoDB, React, Express, and Node js make up this technology stack. A js library that is free and open source. Data flow is unidirectional. Providing support for mobile applications Makes a smooth rendering. There will undoubtedly be much better documentation.

How to Choose Between MEAN and MERN Stacks?

The fact that the entire code is written in JavaScript is a fundamental feature of the MEAN stack. As a result, further exploration and development become easy. And, best of all, the unified offering reduces project costs and development time significantly.

For full-stack development frameworks intended for larger web projects, the MEAN stack is the superior option.

On the other hand, the MERN stack makes it easy to create Niche projects and set up CRUD applications from the start to finish. React is used to make managing fast-changing data easier while still providing a fantastic user interface.

The Advantages of going with a MEAN Stack Development Company

To manage the entire project, developers must be familiar with JavaScript.

Which is more popular, MEAN or MERN?

You must choose a popular tech stack, and your chances of hiring experienced developers improve if you choose the correct stack, as more developers are likely to be familiar with it.

The main difference between MEAN and MERN Stack is that the former uses Angular, whereas the latter uses React JS.

Angular JS offers greater stability to the platform to maintain abstraction in the code and manage project files. ReactJS, on the other hand, allows code development on a rapid scale.