Angular vs React: Choosing The Best Framework For Your Startup 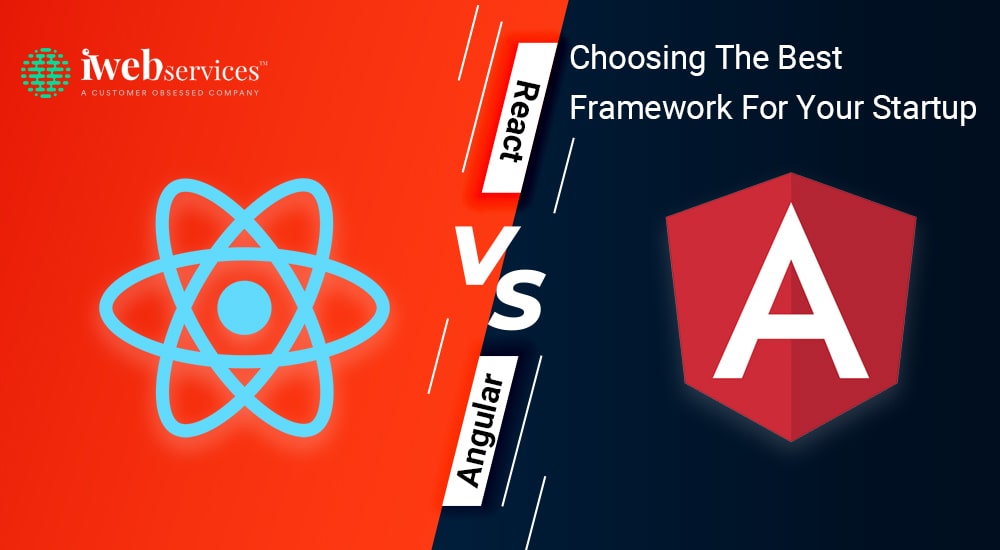 While Angular.js was the first framework released by Google over a decade ago, Angular was just released in 2016 with a complete overhaul. It is still being maintained by Google. The former used primarily JavaScript, whereas the latter used TypeScript.

React, on the other hand, is a community that has been around since 2010. It is a complete library that was introduced by Facebook and is still supported by the social media behemoth, unlike the Angular framework. Since its beginnings, the technology has continued to improve and has exploded in popularity in recent years. JavaScript and JSX are the main components of React JS.

However, if you want to pick one that will be ideal for your project, this article will provide you with a fair comparison of both JavaScript frameworks. There are numerous variables to consider while deciding whether to use React or Angular JS Development Services for your next project. Let’s take a look at a couple of them and see which one is the greatest fit for your project.

A Comprehensive Comparison between Angular and React

While both the Angular and React frameworks are excellent for developing large-scale projects, there is a significant speed gap between them. This is due to the various sorts of DOMs (Document Object Models) that they employ.

This brings the question, what exactly are DOMs?

DOMs are computer APIs that describe the logical structure of HTML and XML documents and allow for changes to the document’s contents, layout, and even structure.

Angular- This is a complete front-end framework that uses actual DOM (Document Object Model) to update the whole tree structure of HTML tables until the needed data is reached. Real DOM deals with a lot of data queries, and as a result, it slows down programs and affects their performance.

React employs a virtual DOM, which allows you to alter the contents, layout, and structure of a document without having to rewrite the actual HTML text. This leads to faster updates and improved performance, regardless of the app’s size. It is possible to update a particular user profile detail, such as the email address, without having to update the complete HTML structure.

Due to Angular’s use of the real DOM, the framework has to deal with a lot of data queries, which might be a pain for your applications. What’s the ultimate result? Slower performance and a heavier application.

React, on the other hand, allows you to construct big web applications that may modify data without requiring you to update the entire HTML structure, making it an excellent choice for creating scalable and quick apps.

Consider the level of flexibility you require for your debugging procedures when deciding between the two for your front-end development project.

Angular- It supports both one-way and two-way data binding, allowing for automated data storage and user interface changes. As a consequence, full data encapsulation is achieved, reducing the need for complicated DOM modifications. It’s essential to note, though, that it’s an excellent foundation for objects that aren’t too complicated. React is frequently the superior choice for extensive data manipulation.

React employs one-way binding, resulting in more stable code and simpler debugging. React applications are made up of a sequence of functional nested components. Because of its one-way data binding nature, this framework is frequently more performant than Angular.

Angular might be a good solution for basic data processing needs because it’s a lot easier to deal with. Once your project matures, you can always switch to React.

Angular is built on reactive programming, which means that components may react quickly to external events. Container components (also known as “smart” components) and Presentation components (sometimes known as “dumb” components) are used in this JavaScript framework. The former knows how to obtain data, but the latter needs data to be fed to them.

React enables you to construct components and arrange them into sophisticated and dynamic User Interfaces (UIs). This framework can be effortlessly integrated into any project, even if it is built in Angular. However, if your project is React-based, you’ll need numerous integrations such as Babel, Redux, and Webpack to fully utilize it.

Both Angular and React have robust ecosystems. Your decision must be based on the flow of data in your application.

While both frameworks are used for front-end web development, their technological architecture is vastly different.

Angular: Instead of picking libraries or components, this framework allows developers to decide on the structure of their projects and begin working right away. While this is a significant benefit in that it eliminates a lot of the bother, it also limits the framework’s flexibility.

React: React is a big library rather than a framework. A  React JS Development company generally combines it with several tools and frameworks, including React Cosmos, StoryBook, Bit, Evergreen, and Reactive, among others, to utilize it as a framework. It does, however, need a great deal of decision-making, upkeep, and management of upgrades and migrations.

Developers that use React must make their own design decisions and stay up with the newest developments. Angular is the ideal solution if you want programs that are simple to maintain and migrate.

React is a superior option.

Nothing compares to Angular.

Your best choice is to use React.

React is an excellent framework for 3rd-party libraries.

In such cases, Angular can be a great digital asset.

In the realm of technology, both frameworks are equally popular. Facebook, Netflix, Instagram, Whatsapp, and Airbnb are just a few of the world’s most well-known ReactJs-based projects. On the other hand, Google, Nike, Telegram, PayPal, and Upwork are Giants based on AngularJs.

While reading this post’s comparison of Angular and React, you may have observed that they both have advantages and disadvantages. The truth is if used judicially both frameworks can create robust apps which can satisfy all your business needs.

If you are still in the dilemma of choosing Angular or ReactJS Development Company, you can send your project requirements to us. At iWebServices we have a team of javascript developers who have experience working with both the tech stacks. Our developers can help you select and create the most pleasing virtual experience through React or Angular JS.