How Can PWA Benefit eCommerce Businesses in 2021? 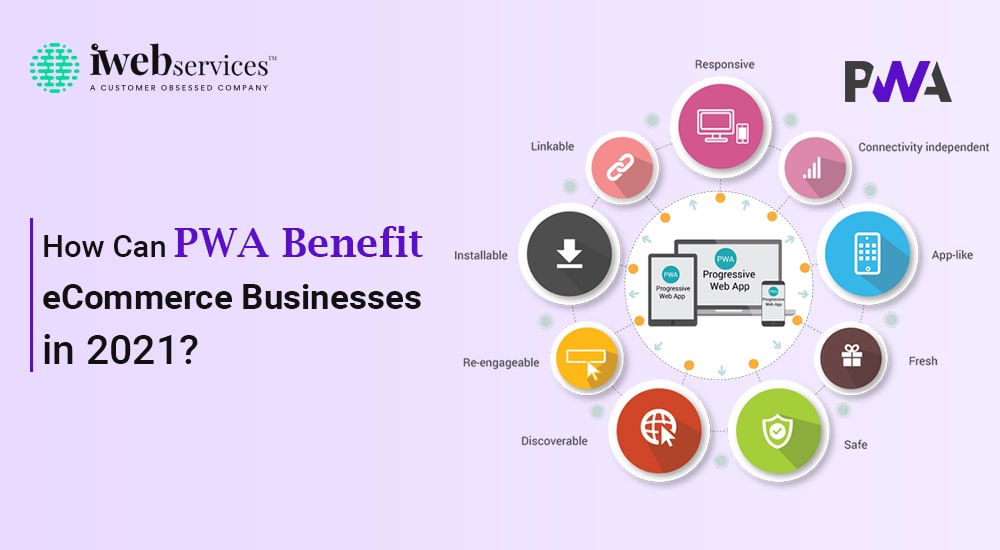 The number of smartphone users is expected to surpass 3.8 billion by 2021, indicating a tremendous increase in mobile consumption over the last decade. Businesses must consider building a mind-blowing mobile strategy to prosper due to the increased use of mobile phones for everyday chores such as shopping, meal ordering, and on-demand service procurement.

Users are more motivated to test these apps because they do not require downloading or installation on their mobile phones.

What is a Personal Web App (PWA)?

A progressive web app is a technique that allows companies to create web applications that appear and feel like native mobile apps while still using web technologies like JavaScript, HTML, and CSS. To create highly engaging PWA stores, a PWA development company can leverage static site generators like Gatsby or VuePress. On the backend, these can be linked to eCommerce systems.

PWAs operate in the browser but provide users with the same experience as a native app by including features such as:

Native apps may be supplanted by PWAs shortly According to a Jaxenter poll, 46 percent of their developer audience believes PWAs are the way of the future, while only 14 percent believe native apps will win out in the end. A native mobile app may still make more sense for some firms. For others, a PWA can serve as a replacement for a mobile app. Some companies may choose to mix the two technologies.

PWA development services are gaining traction as a popular new solution for headless commerce setups. Decoupling the frontend presentation layer from the backend eCommerce logic is known as headless commerce.

The brand can acquire the fast, responsive, app-like experience they want by employing a PWA on the frontend and linking it through APIs to the commerce capabilities that can drive users through conversion.

Progressive Web Apps Have a Lot of Advantages

E-commerce mobile share is continuously increasing. Mobile commerce is predicted to account for 53.9 percent of all online retail sales income by 2021. Businesses are trying to figure out how to get a piece of the mobile eCommerce pie. While this method used to necessitate the use of a native app, the advantages of PWAs now make it viable for some organizations to achieve the same functionality using PWAs.

A good Progressive Web App Development Company makes PWA’s that are made to work for everyone, no matter what platform they’re using. They’re also adaptable to different screen sizes. More people use them than would download an app because they are instantly accessible to a large audience and easy to distribute via a link.

Development expenses and time are reduced

Not only does a native app require its own development, but it also necessitates its upkeep. And, to reach the same audience, you’ll need to create an Android app, an iOS app, and possibly a Windows 10 app–all of which you’ll have to manage in addition to your website.

According to Google, if a site takes longer than 3 seconds to load, 53% of mobile consumers will quit it. PWAs can do this because they’re designed for smooth and quick user experiences. Because they leverage modern web development technologies and frameworks, PWAs are typically very fast. Even better, the apps may be used offline or on low-bandwidth networks.

PWAs are also available offline because they are loaded into the cache on the initial run. Users on 3G, 2G, and low-bandwidth networks will have no problems accessing your e-Commerce PWA.

The app caches everything once a user makes a move on the app and purchases your items. Their purchases begin once the network connects them to your website. You can count on repeat customers.

By providing PWA, you can reduce the time a user spends hopping from one screen to the next. Because, unlike an app, a PWA loads the program from the cache and remains active even when there is no data connection, its responsiveness is guaranteed. Even on a sluggish network, a Progressive Web App launches quickly.

Features similar to those found in apps

Users receive their notifications on time, even though they take up a minimal amount of space on their phones. Website updates are mirrored in the background, and clients are spared the aggravation of dealing with a middleman—the Appstore.

PWA stores itself as an icon on users’ home screens, so they don’t have to visit the website all the time. Progressive Web Apps can also be installed on a desktop computer. Users will no longer have to visit websites every time they want to do some window shopping.

Whether it is necessary for a business or not, users are always looking for ways to reduce their data and internet costs. In this regard, the top Progressive Web Apps for e-Commerce are like a disguised saint for customers. A PWA would only need a few MBs of memory, whereas an app might take up 40MB.

Whether you’re in charge of an established brand or a new e-Commerce site, you owe your customers more than just items. You may vastly improve your users’ experience by partnering with a professional progressive web app development service company like iWebServices.

Summary
Article Name
How Can PWA Benefit eCommerce Businesses in 2021?
Description
A complete guide to explain that How eCommerce Brands Can Benefit From PWA in 2021
Author
Sara Williams
Publisher Name
iWebServices