Why Python Is Best Choice For Artificial Intelligence In Development? 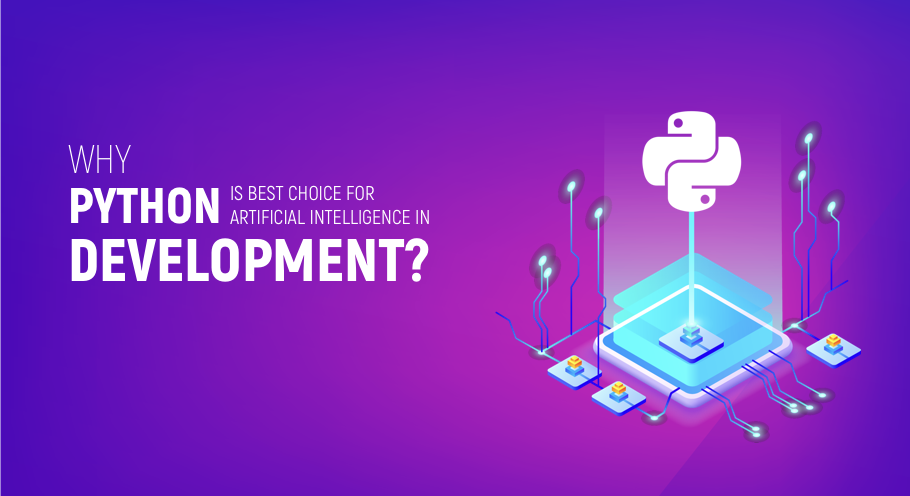 Table of Contents
Share this article
Whether it’s a startup or a Multi-national Company, Python has a great list of benefits for everyone. It is the most popular and a powerful high-level programming language which has gained great popularity in 2018. Its increasing popularity has allowed it to enter some of the most complex processes such as Artificial Intelligence (AI), Machine Learning (ML), the processing of natural language and data science etc.

Python has a large number of built-in libraries. Many of its libraries are for Artificial Intelligence and Machine Learning which makes Python a favorite for every business. Many web development companies are using Python since it is powerful and easy to implement with AI in web development.
On the GitHub, Python surpassed Java as the second-most used programming language, with 40% more pull requests opened in 2017.
According to Stack Overflow, 38.8% of its users mainly use Python for their projects. As per a recent survey, Python’s popularity surpassed C# in 2018 just like it surpassed PHP in 2017.
According to builtwith.com, 45% of companies prefer to use Python for implementing AI & machine learning.
According to Statista, In 2019, the global AI market is expected to be worth 7 billion U.S. dollars.
It can’t be denied that it is only a matter of time before AI begins to make a big difference in multiple industries.
In this article, we will discuss the various reasons for opting for Python in AI development projects.

There are many algorithms which are involved in AI (Artificial Intelligence). The ease of testing provided by Python makes it one of the best programming languages among its competitors. You can easily write and execute all the codes with Python.
Python is able to implement the same logic with a fifth of the code when compared with other programming languages based on OOPS. Therefore, this is one of the reasons why companies prefer Python for AI-based projects.

Python is loved by millions of developers worldwide. Python’s learning facility is now attracting the new developers to learn the programming language. Although AI Technology based projects require experienced developers, Python language is a learning curve without problems.
Instead of looking for a multiprogramming developer, It’s easier to hire Python developers. Python’s active developer community and its expanded libraries have led Python to become the languages with more current trends with improved source code and language in development,

AIMA and Norvig are some other libraries that can be used for the implementation of algorithms in artificial intelligence. All these dedicated libraries save developers time. Thus, if you do not have any knowledge about these libraries, it is better to hire Python developers who have the knowledge to work on them.

Flexibility is one of the main benefits of Python. Python is suitable for both scripting and OOPS approach any purpose. Therefore it gives developers an option to choose between. It also works as a perfect background language for combining different data structures which is also suitable for Python.
Python gives an option to verify the majority of the code in the IDE itself and which provides the developer’s relief as they are fighting between the algorithms.

Python gives the developer the flexibility to provide an API from the existing programming language, which in fact is an extremely helpful feature for new Python developers. Since Python is independent of the platform and with only minor changes in the source codes, you can make your project or application work in different operating systems. This saves developers a lot of time to test various operating systems.

You should hire web app developers who have experience in AI-based projects If you want your AI project to be the best.

You will find this article useful: The Hype About Artificial Intelligence

Python is an open source programming language which gets great support from the developer community. There are several resources available which can provide a solution to any problem in a short time.
Also, you should not forget that there is a large community of Python developers who are willing to help other developers at various stages of their development life cycle.

Artificial intelligence is becoming more complicated day by day. Python is making the development process of AI-based project much easier because of its shorter line of codes. In addition, there are various built-in libraries that can make the AI-based project advanced.
The simplicity of Python has motivated many developers to create new libraries for AI & machine learning. Due to its huge collection of libraries, Python is now becoming more popular with dedicated machine learning experts and AI developers.
If you do not have much working experience in the Python. Then, you should hire a Python development company that can guide you throughout your project.
The development team at iWebServices (a leading software development company in USA & India) are always at your disposal to cater all your project needs.