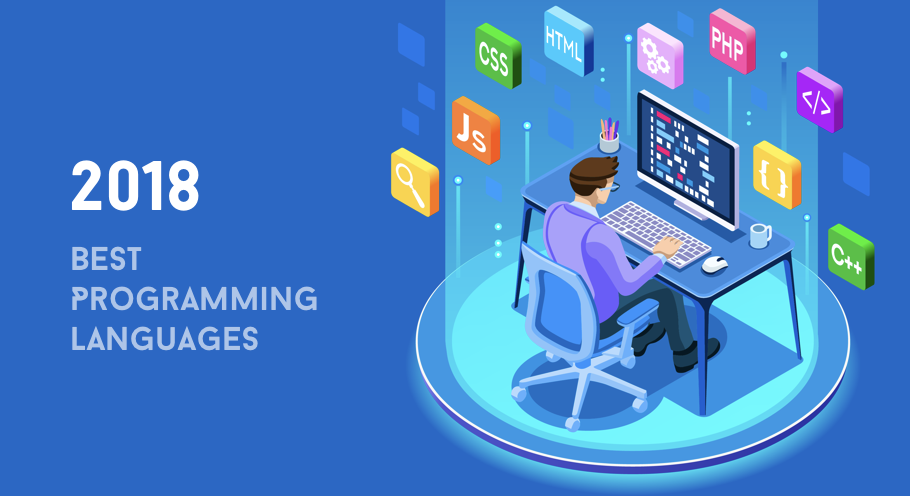 Table of Contents
Share this article
Different people will give different answers when they will be asked what they believe are the most popular programming languages. This is because ‘most popular’ is a subjective term and one which can’t really be answered without adding more parameters. It could be any of the following:

As you can see, it is important to define what we meant by ‘most used’ before we can get into our list of the most common programming languages.

We can list the most used programming languages according to any source. For this article, we have decided to use the Tiobe Index, the world-recognized authority for programming language popularity which is released monthly by the software company Tiobe.

All statistics and order of popularity for this article have been taken from the Tiobe Index August 2018 version of the list.

What is the meaning of the TIOBE Index?

The number of courses that are available for a language – It gives an indication of demand for a particular language, the number of people who are willing to learn it, and how widespread the language is likely to be in the future.

The search engine popularity of the language. It indicates how popular a language is to the general public.

What Makes A Programming Language Popular?

Keeping this in mind, let’s look at some of the major factors which might seem to be the common among the most used programming languages of 2018:

Ease Of Use: Simpler the language more popular it will be, as almost all the popular languages have a relatively simple syntax, large online communities, and are very easy to troubleshoot.

Speed: Speed is essential when it comes to developing things like websites or games. It makes sense that in-demand programming languages are the fastest.

As you will see when we start looking closer at the most used programming languages, it is very rare for a language with narrow use-cases to be widespread. In general, the languages are confined to a small niche with a few active users.

Which Programming Languages are most popular in 2018? 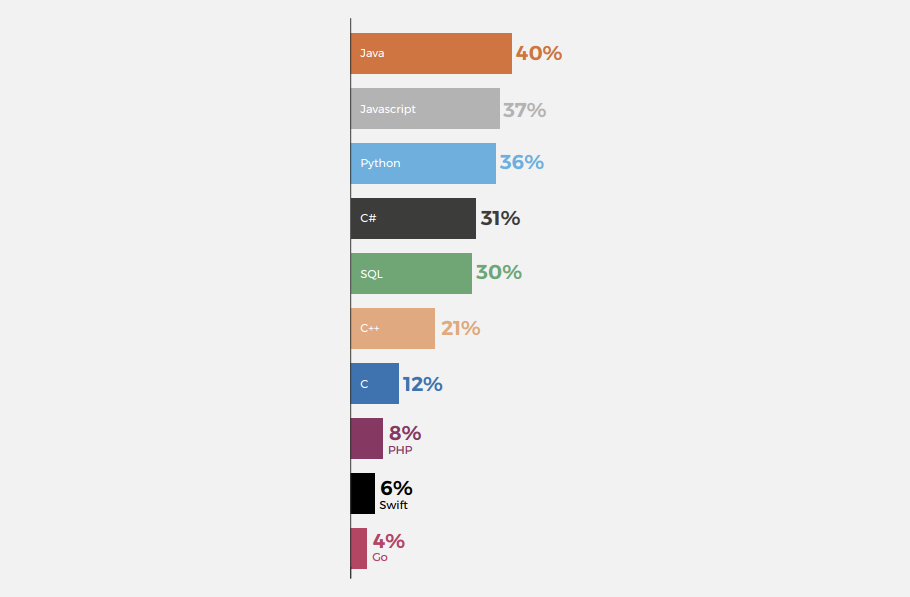 Apart from the names of popular languages, we will also provide a brief outline for each language, followed by the reasons why they have made it onto the list. Following are the most popular programming languages of 2018 :

At the top of our list is the most common programming language in the world, Java. Since the inception of the 21st century, Java has never lost its position as one of the top two most popular programming languages. At present, it has a rating of 16.88%, which is slightly above C with 14.97%, but in third place is C++ at 7.47%.

Java is one of the most versatile and flexible programming languages. It is used by companies to create desktop apps and for back-end website development. One of its unique features is that Java is able to run on pretty much any operating system. It is also the most popular language when it comes to Android app development, and it is also used by millions of websites due to its scalability.

The demand for Java developers is always very high. In reality, if you are an expert in Java, you will never be unemployed. The huge online community of Java means that it is a very simple language to learn – you will always find some help whenever you run into problems with your code.

Due to its super versatile nature, it is used for everything from developing mobile games to car computer programming.

It is Superfast, which makes it arguably the most useful programming language when it comes to game development.

It has been used as the basis for various other languages, including C# and C++. If you have managed to learn C, then you will find it much easier to learn these other languages.

C++ comes in at the third position on the Tiobe Index with a rating of 7.47%. Although it is well below the ratings of Java and C, it is still significant when compared with the other languages that are present on the list.

C++ is used for various things, including, procedural, functional, and object-oriented programming. It is super flexible which makes it very useful in writing all sorts of programs. One of the most common uses for C++ is most commonly used to create applications for use on a range of different devices or platforms. As it is recognized by most the operating systems and browsers, making it the perfect language for this.

Game development and video editing are two of the most popular uses of C++, Thus it automatically becomes the popular choice for people who are looking to get into these industries.

If C++ seems like an interesting language to you, it is important to understand the fact that it is a very complex language that will require significant time commitments.

Ahh, back to good old Python which is one the favorite amongst the programming language learners throughout the world. It arguably tops the list of most popular programming languages to learn first. Python is taught in schools, and there are many introductory programming courses for it because of its simplicity.

Python was developed in the 1990s and it is another very versatile language that is used for all sorts of things. Apart from its traditional uses like web development and data analysis, it is becoming quite popular in the fields of Machine learning, artificial intelligence, and robotics.

As we already know, Python is super easy to learn, making it the best programming language for beginners. As you will learn the Python Basics, it will teach the first-time programmers everything they need to know to write Python code. After that, they learn to Make Python Data Structures and Python Image Recognition, which will help them to explore some of the real-world uses of the language and are which are more popular amongst the intermediate to advanced Python programmers.

Visual Basic .NET or VB.NET was developed by Microsoft in 2001. It is an object-oriented, multi-paradigm programming language. Although at present it isn’t as common as it used to be, VB.NET is still a great language for people who are looking to get into web service application development.

The language is quite a simple language to learn – as the name implies – and therefore it is also popular among beginners. VB.NET is one of the most powerful languages that are present today in the market. It is a high-level language with easy-to-follow Syntax, as it reads like English.

VB.NET and C# are two major languages that target the .NET framework. In most cases, C# is used instead of VB.NET, so it is highly recommended that you should do your research before learning it.

C# is one of the most used programming languages due to its security and robust nature.

It is used to create Client-side server applications, Windows client applications, database applications, and a whole lot more. Like VB.NET, it also runs on the .NET Framework, which has a very advanced, easy-to-use code editor, and makes the process of debugging a lot easier.

C# is an object-oriented C language, which can be quite difficult to learn, especially if you don’t have any previous programming experience. If you understand the Java basics, then you will find C# a lot easier, as they have similar syntax. We recommend learning a simpler language like Python or Java before learning C#.

PHP is also called the language of the web. Although some companies have started to move from PHP to other modern languages, still over 80% of the websites on the internet still use it.

PHP facilitates the back-end web development, thus allowing developers to build dynamic web applications with complete MySQL database connections. It is used by high-end developers all over the world, which indicates that learning PHP would be an excellent choice to start your programming journey. Some of the best features of PHP are:

Many people will argue that JavaScript should be higher on this list, and they might be right. As a language that has traditionally been used for front-end web development, JavaScript has exploded in popularity recently as most developers have begun to use it for back-end development as well.

However, there are people who claim that JavaScript sometimes confuses the code which will result in it losing a lot of popularity in the future. One should keep this in mind when you are choosing a language to learn that because JavaScript is popular now that doesn’t necessarily mean that it will be in the future.

You will find this article useful: Declining Programming languages

SQL is quite different from a lot of the languages on this list but it has a very specific use case. It facilitates the analysis of consumers, sales, and other data from company databases. SQL is also known as the Structured Query Language, it allows you to interact with databases in a way you want to. It is used by all major eCommerce platforms – including giants like eBay and Amazon – to perform their major business and marketing decisions.

There are various reasons why you should consider learning SQL, including:

They are used in scientific research facilities, medical centers, and various other places to run simple programs and to control the set of certain devices. Due to its vast usage, Assembly Languages are amongst the most useful programming languages.

Conclusion –Which Programming Language is Best for You?

We looked over numerous different languages, each of which had its own set of features. Now the question still remains:

How do you choose and decide which Programming Language is Best for You?

What do you want to do? Depending upon your career choice you can decide which language will be best for you as you just learned that languages are preferred for different things.

Your Programming experience: Harder languages are best left to people who already have at least some programming knowledge.

Always remember – that the right language for you will depend on your needs, zeal, and commitment to becoming a programmer.

Article Name
Top 10 Programming Languages in 2018
Description
There is a wide range of things that could contribute to the popularity of a programming language. Some languages find themselves among the most popular list simply because they are widespread and versatile
Author
Yatin Malik
Publisher Name
iWebservices
Publisher Logo