What is the Best Programming Language to Build Mobile Apps? 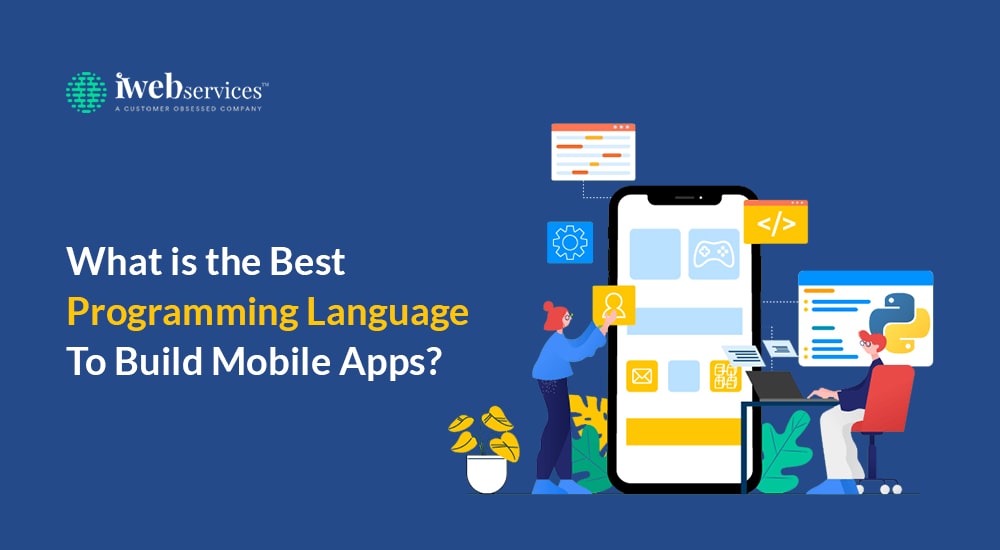 Mobile technologies have taken over the digital era. People use their mobile phones to explore things on the Internet, communicate with family and friends, do business, and much more.

People are spending a lot of time interacting with applications, resulting in high demand for mobile app development companies with experts in related programming languages.

Because more businesses are migrating to the mobile environment, the demand for mobile technology will continue to rise.

While creating a mobile app, you’ll want to be sure you’re using the correct technologies. This first stage of selecting the appropriate programming language ensures that your software is both unique and user-friendly.

Native apps are written in a language that is natively supported by a device’s operating system. (For instance, a native iOS app vs. a native Android app.)

Cross-platform programming for hybrid apps. Apps are written in a single programming language and run on a variety of platforms.

Here is a collection of programming languages to help you with your mobile app development needs.

Apple established the iOS platform. When you create an iOS app, it will run on all Apple devices, including iPhones and iPads. Apps written in the iOS programming language can be made available for download on the Apple App Store. To begin developing an iOS app, you must first create an Apple developer account.

Despite the presence of newcomers, Objective-C has stayed in the game. It’s because many apps have already made security investments in the language. Even now, many people rely heavily on Objective-C.

Swift is a new open-source programming language that works with the iOS, OS X, and tvOS platforms. It’s easy to maintain and doesn’t have any Objective-C bugs. Swift makes it easier to scale projects. This programming language is adaptable, allowing it to add functionality to any app by following a programming pattern. It was released primarily for iOS, iOS-supporting platforms, and Linux and has since become the dominant language used by iOS and OS X developers.

JavaScript is one of the popular programming languages that are easy to learn. It’s an interpreted high-level programming language that supports both object-oriented and functional programming. It is a browser-based paradigm language that is also used to create web pages. Its frameworks are well-suited to mobile app development and may be utilized on Android, iOS, and Windows. Many programmers choose JavaScript because it is simple to use and modify. Thus, providing developers greater flexibility in app development.

Scala has established itself as Java’s alternative. It is intended to fix Java’s underlying issues. Scala is compatible with Java because it runs on the Java Virtual Machine (JVM), one of its distinguishing features.

Java is a class-based, object-oriented programming language that is meant to have as few implementation dependencies as feasible.

Though Java is unlikely to be your first choice for designing an iOS app, it can still be useful when working on cross-platform projects.

Kotlin is regarded by developers as a more advanced version of Java; it is an interoperable and adaptable programming language that can easily overcome Java’s flaws. This programming language is straightforward, concise, and statistically typed. It offers various sophisticated features that make it a superior option, and it works similarly to Java. A distinguishing feature is that it practically supports all IDES, making it ideal for your programming needs.

Python is a widely used computer language that may be used for a variety of purposes. It was used by developers to create cross-platform apps for the web, desktop, and mobile. It can also create an Android or desktop app from the ground up. Python is the most prevalent programming language taught to pupils in schools. Python is popular because it is simple to learn and understand. It’s a straightforward, legible language that’s a little sophisticated but not overly so.

For mobile apps that require database access, most developers prefer PHP. It’s an open-source programming language that’s simple to pick up and use, making it ideal for beginners. It also integrates quite well. It’s ideal for apps with a lot of material. Even with a sluggish internet connection, PHP loads swiftly and includes built-in security protections.

PHP (Hypertext Preprocessor) was created primarily for website development, although it is now used in various types of programming. It may now be used to create Android and iOS apps of any kind. It’s also used for server-side scripting, command-line scripting, and coding applications.

C# was created for Microsoft because it can create long-lasting Windows Phone applications. Unity3D also supports it, making it an excellent platform for creating game apps. It is a flexible programming language that has been used to develop applications in a variety of industries.

C++ is utilized in various industries, including financial institutions, banking, manufacturing, and more. It is in the market for a while and is liked by developers who use it to create mobile apps for iOS, Android, and Windows.

C++ may be used to design and develop a variety of operating systems, games, web browsers, medical applications, and enterprise applications.

When it comes to selecting a programming language to learn or framework to invest in, there is no single right or wrong. All the options presented in this guide are worth considering. They all have advantages and disadvantages. There are many more languages available, such as Python for server-side programming and others.

All you have to do now is figure out what’s best for you and your company’s objectives. What type of application are you working for? What is the application’s requirement? Where do you want to focus your efforts the most? Do you want to work on it only once or several times?

These are some of the questions you should ask yourself to determine how best to spend your time, effort, and resources. After all, the crucial thing is to ensure that you can get your software to market as swiftly as possible.

We hope that the above list will help you decide which language to choose for your mobile app development project. At iWebServices, we develop mobile apps that can cater to your present and future needs. Get in touch to know more!

Article Name
What is the Best Programming Language to Build Mobile Apps?
Description
If you plan to build a mobile app, you need to know the best programming languages and frameworks for Mobile Apps.
Author
Gaurav
Publisher Name
iWebServices
Publisher Logo