Android Vs iOS: Which Platform To Build Your App For First? 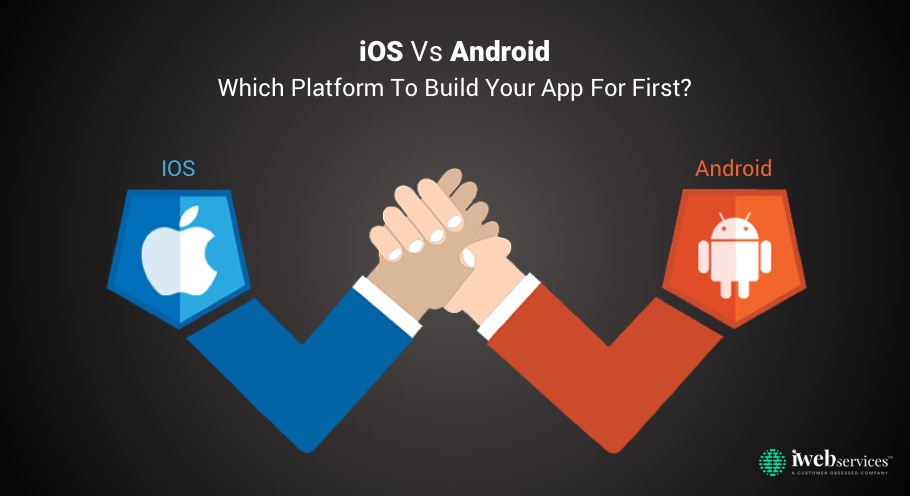 Are you planning to build an app for your business but not sure whether to choose Android or iOS platform? There are varied parameters based on which a choice can be appropriate. The timeline of the project, audience, budget for app maintenance, features of the app, and the business objectives are a few things to keep in mind. The first decision of whether to build an app for Android or iOS can be tricky. Even though your ultimate goal is to develop apps for both platforms, you should put the risk of developing both apps at bay at the same time. No wonder, a majority of companies develop apps for one platform initially before switching to another.

Getting with the Basics

You are already aware that Android has been a leader in the mobile operating platforms and occupies substantial market share. While going through the statistics, you may not be able to skip that the market share of Android rose over seventy-four percent in 2019 while iOS could only capture about 23% of the market share. However, that you need to make a decision hurriedly whether iOS or Android is a better for business app development. While Android is better is specific locations, iOS has been performing consistently well in several other locations.

Things to Know About iOS

The iOS platform comes from Apple with a limited ecosystem. Here is what the mobile app developers need to know.

The Apple devices are usually more expensive than Android devices.

Things to Know About Android

Android, on the other hand is an open ecosystem, which allows users to access various functionalities and modifications, although it is less secure than the closed ecosystem.

The following factors determine the development of mobile apps for Android or iOS.

There are several differences that grab the attention of the audience using iOS or Android. For instance, the Android devices for huge market share, although Apple intimidates the app store.

According to estimates, development of apps for Android takes place quicker and it is cost-effective. Experts put Android app development at about 30-40% longer. One of the reasons why development of iOS apps is easy due to the code. The apps of Android apps are Java-based, which requires the developers to write more code than Swift, which is the official programming language of Apple.

Android is an open-source platform, which reduces the standardization and more devices while iOS comes with a restricted ecosystem, which implies few devices. Quite naturally, iOS comes with greater quality control due to stricter rules and the apps need to go through a thorough reviews process. If the iOS app fails to maintain the required standard expected from it, it can face rejection.

When it comes to designing business apps, what features would you like to include in it? Android is open-source, which makes it easier for developers to design customized features that can address the demands of your clients. However, the open environment of Android exposes it to security lapse, such as malware and pirate apps. Apple is a more secured platform, which makes it largely acceptable among the audience in the business market.

The development of apps from Android implies that you need to spend more time on it to ensure that the app resonates with the platforms and avoid crashes in the older version of the operating system. Studies reveal that Android users are less likely to embrace new operating systems. On the other hand, Apple users can update the OS faster than the Android users. Most of the Apple users run their devices on the present version and have at least two of the latest operating systems present on their devices. Therefore, development and programming for iOS apps is easier.

When it comes to using apps for making purchases, there are a few differences to know.

If you are eager to make money through the apps without any advertisement, whether through in-app purchases and subscriptions, iOS apps are useful.

The place where your audience resides, the features of apps, the timeline for development ad budget are a few factors to consider when building apps for iOS or Android. For the creation of a feasible product within your budget, the iOS apps may be your best bet. Furthermore, if you are eager to build an e-commerce store or want to monetize the app, iOS is a better option to choose. On the other hand, if you are keen to address the upcoming markets of Latin America or Asia, and the apps you want to develop comes with features that re absent in Apple, Android should be your choice.

Which platform is suitable for your business goals? iOS or Android? While viewing the platform that suits your business goals better, you need to choose the platform that allows you to earn revenue directly through the users. iOS does not enjoy a similar popularity like Android, and it is one of the leading platforms in a few countries. Eventually, whether to create an app for Android or iOS depends largely on the target audience and their geographical locations.