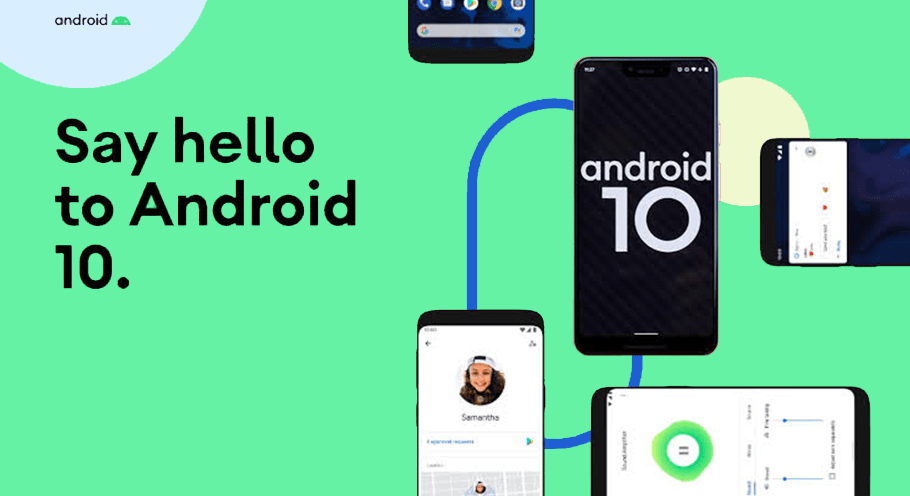 Table of Contents
Share this article
Google has already rolled out the latest version of its remarkable operation system – Android 10, also called Android Q (Quiche). There have been a lot of changes in the update. One of the most notable ones being how Google didn’t follow its legendary dessert-naming approach.

Released on September 3, 2019, Android 10 come packed with incredible features, some of which include new Dark Theme, accessibility features, more security, and enhanced parental controls. Before moving on to explaining these features in detail, let’s take a look at the devices that can support Android 10. 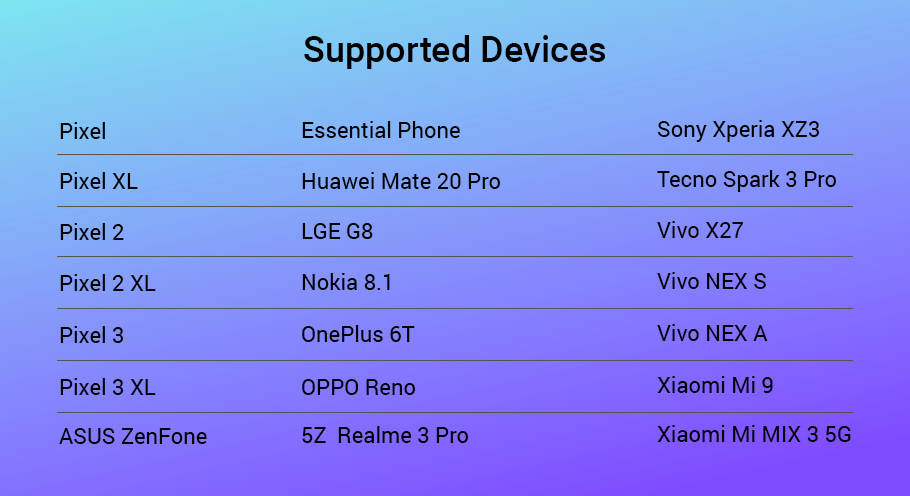 Google always talks about only a handful of features of its new update or product, which have been mentioned below. However, our team will continue to test the update and see what’s new and we’ll update the list if required.

Just like Facebook Messenger’s Chat Heads feature, Google has come up with Bubbles, a circular notification on either edge of the screen, gliding on top of anything that’s on your screen. However, it is recommended that Android app developers remain mindful of the kind of apps that would use Bubbles to avoid an annoyingly large number of bubbles floating on the edge. 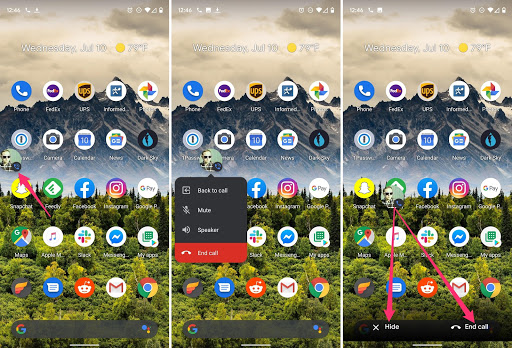 In the above screenshots, Bubbles is on the Google Phone app. It is triggered when you leave an active call and you see the notification circle with the contact’s image. If you drag it around, you see two options. On the left bottom, there’s Hide, and on the right bottom, there’s End Call. Whichever option you need to choose, just drag the Bubble to it. If you tap on the Bubble, it will reveal more options to enable the speaker or mute the call.

The major focus area of Android 10 seems to be centered around user privacy. For instance, users would now be able to restrict when an app gets access to their location. Before, you could either give an app access to your area, or you couldn’t. With Android 10, you can restrict an app’s access to the location just when you are utilizing the app. 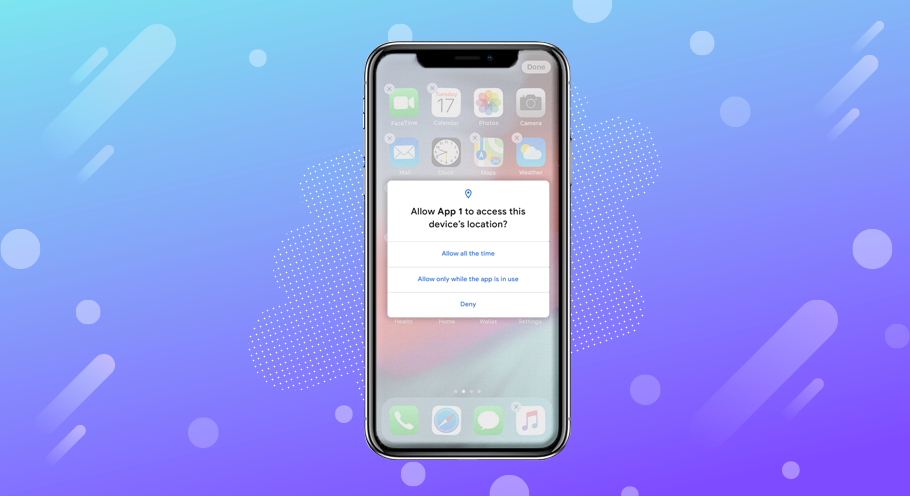 There are additionally better controls for file management, limiting access to device identifiers, for example, the IMEI, serial number, and different IDs that can help track a user.

Google now has an official Dark Mode on Android, available through the Display settings menu. You can turn on Dark Mode depending upon the hour of the day, or you can have it always on or always off. Upon being enabled, apps will have a dull tint to them, while panels like the Quick Settings shade will have an OLED dark background. The Dark Mode appears to work in most stock Google apps, yet it might also work in outsider apps that don’t have their own Dark Mode. 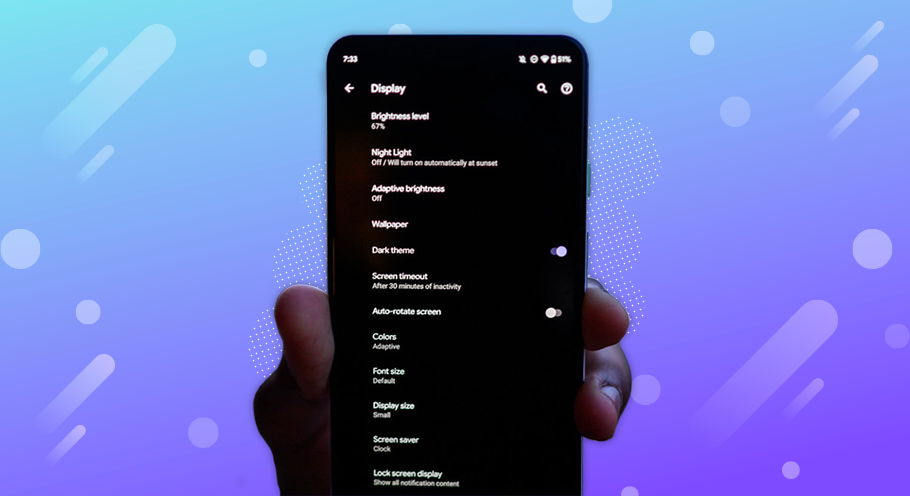 There are a lot of reasons you may need the Dark Mode. Aside from it being somewhat easier on the eyes, Dark Mode could spare battery life on smartphones with OLED displays.

Since its origin, Android has constantly highlighted navigation buttons. However, they’re now taking an exit with Android 10 for another gesture-based navigation system. 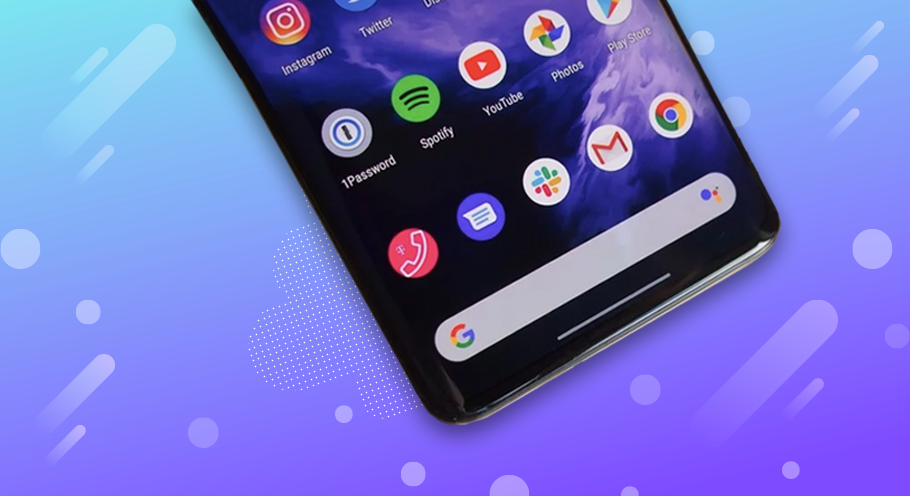 Now, swiping up will take you to the home screen, while swiping up and holding opens the Recents menu. Swiping from the left or right edge goes back, so there’s no back button anymore. You can even change the sensitivity of the back gesture with four alternatives. The second sensitivity level is the default. You can also disable the gesture navigation system if you don’t like it.

Ever incidentally deleted an app from your home screen and can’t recall which app was there? With Android 10, you have a few seconds after an application has been removed to fix the change. You’ll discover the undo button along the bottom of the screen. Press it and bam, the application is back where it was. 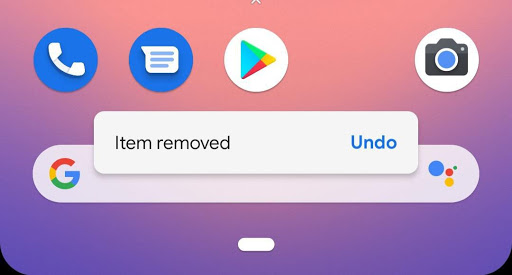 Google is making it simpler to put down your phone down and focus on your work. Whatever you’re doing, Focus Mode enables you to turn off notifications for certain applications, just keeping notifications for the apps that are important to you. 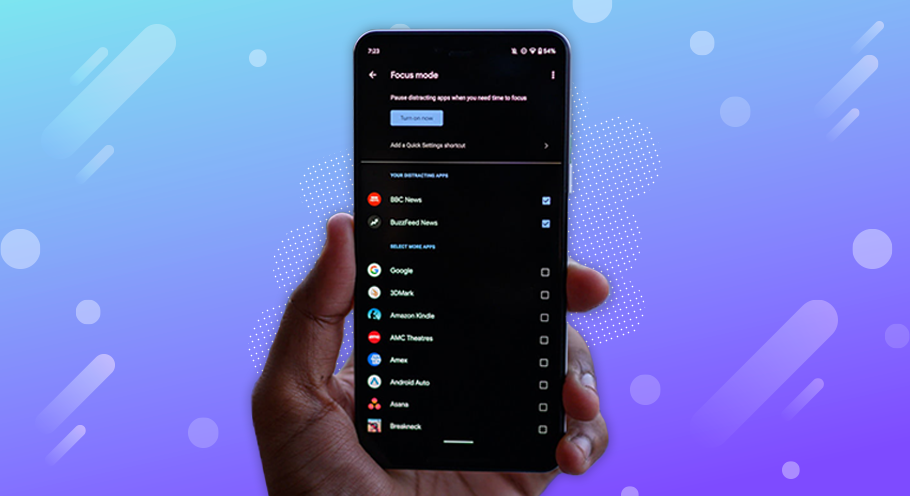 Enable this setting by going into Digital Wellbeing and pick the apps you need notifications for. You can even set Focus Mode as a Quick Settings tile so you can rapidly turn it on or off. When you turn Focus Mode off, notifications from all applications will show up again.

The component is handled on the gadget and uses Google’s speech recognition technology. This component isn’t accessible yet — it’s coming this fall, likely appearing on the Pixel 4. Google will probably carry it to Pixel telephones first and after that discharge it to all Android 10 telephones sometime in the future.

Android 10 additionally is quicker. Google is proceeding to extend Vulkan graphics inside Android and is fortifying ART (Android Runtime) execution, which should help applications load quicker and utilize less memory once they have loaded.

There are numerous other changes in Android 10:

iOS 13 is to be launched on September 19, 2019, while Android 10’s beta version is already here. Perfect opportunity for us to compare the two! We’re putting together this comparison with respect to the highlights Apple disclosed at its developers’ conference (WWDC ‘19) and the ones we’ve seen from Google up until now, and not on direct correlation on definitive gadgets. We’ll spare that fight for after the final version of iOS 13 and Android 10 come out.

Throughout the years, Apple has made keeping user information private a selling point. At WWDC, Apple said it would give clients more control of location authorizations with apps, sharing that data once and afterward have the application demand it again should it need it. Apple additionally divulged another sign-in strategy that lets you namelessly sign in to sites and applications without being tracked. The component, Sign in with Apple, will be required for apps to include this fall.

Google has a harder case to make when it comes to user privacy on the grounds that their primary source of income is its advertisement business, based on what clients look for, for instance, and which videos they watch. Google has taken a major step with the following rendition of Android: Android 10 gives users more command over what data they share through apps.

Google Photos offers nearly all that you’d need in a photography service. It combines easy backup and photograph sharing with amazing, easy-to-use editing tools to make an all-in-one photography device for an Android smartphone. Night Site mode on Pixel takes the trophy. Since it’s from Google, you can scan for people, spots, and things to see every one of the pictures Google Photos has doled out the tag to. What’s more? The first 15GB of online storage is free. 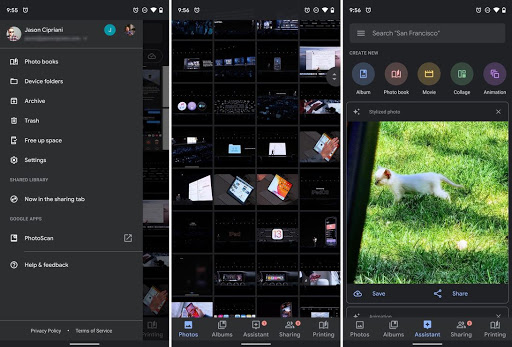 Apple Photos accompanies a rich set of editing instruments, and in iOS 13, the app will have more features, including the capacity to modify the intensity of image lighting with a slider. Apple Photos exceeds expectations at recognizing faces, items, and scenes to enable you to sort through your pictures. Sadly, a great part of the application’s power is accessible just to Apple’s users. Furthermore, only the first 5GB of iCloud storage is free.

With Apple Arcade, you’ll have the option to fool around on your iPhone, iPad, Mac, and Apple TV gadgets. Strangely, Apple at WWDC said Arcade will work with Xbox One S and PlayStation DualShock 4 controllers.

Google with its Stadia service is tied in with blood-rushing games and will give you a chance to play them anyplace you can find a Chrome browser. Google Stadia will have its own controller and work with outsider controllers.

Apple may have been the first to come up with a voice assistant in 2011 with Siri, yet Google Assistant hovers around it, and throughout the years, Apple has done close to nothing to fill the gap. In iOS 13, Siri gets a new robot voice and has picked up a few new tricks, such as scanning for WatchOS applications on the Apple Watch and having the option to read and react to new messages through AirPods and stream radio stations. iOS 13 will come preloaded with Siri Shortcuts.

Be that as it may, Siri doesn’t perform as well as Google Assistant at perceiving and understanding various voices and directions. It’s this essential usefulness that is at the core of the issue. Google assistant is integrated firmly into all that you do on your phone, and can proactively make proposals by taking a gander at your schedule and Gmail account for forthcoming reservations and arrangements. 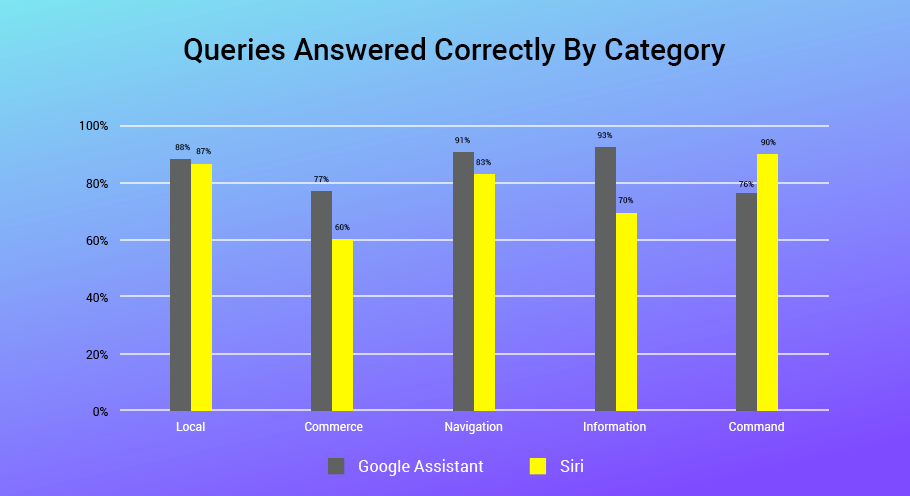 Google has put its assistant on each Android phone, in the $49 Google Home Mini and $299 Google Home Max, and into vehicles as Assistant Driving Mode. At its ongoing Google I/O developers’ conference, the organization flaunted a scope of Google Assistant personalization highlights.

You can introduce Android 10 in the event that you have a Pixel phone. Ensure that you acclimate yourself with gesture navigation and dive into the new privacy settings. Don’t forget to comment on what you liked and what you didn’t. We’ll surely get back to you.