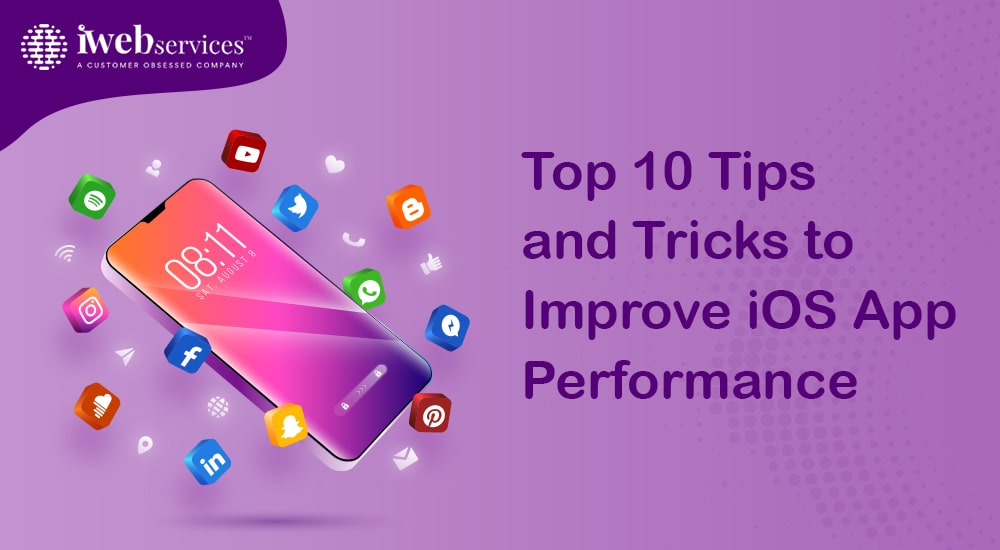 Smooth and responsive performance is the most critical criterion for any software. Apple gadgets are well-known for their better performance and design when compared to their competitors.

If you want your app to appeal to Apple customers, it needs to be designed in a way that it responds quickly and performs well. With so many iOS app development companies to choose from, creating and designing an app is no longer a difficult task.

The App Store is flooded with millions of iOS apps, so your app needs to be unique to stand out. In this article, we’ll go over several pointers to help iOS app development companies improve the performance of their iOS apps.

It is essential to develop an app that takes into consideration the end user’s needs and preferences in order to get desired results. Therefore, analyze your target market to get an app around their needs.

For this first conduct primary research for a general understanding of the audience and their demographics such as age, gender, economic conditions, relationship status, etc. Then, carry out secondary research that would focus on competitor analysis to identify the behavioral patterns of your target audience.

While developing your iOS app cache what’s important – mostly the things that have a low probability of changes and are accessed rather frequently. You can consider caching images, remote server responses, and calculated values for example UITableView row heights.

There are several ways to get data from a web server into your program, but the most prevalent are JSON and XML. You’ll want to make certain you pick the best one for your app.

JSON is easier to parse and has a smaller file size than XML. Thus, there are less data to transport. Since iOS 5, there’s been built-in JSON deserialization, making it even easier to utilize.

However, one advantage of XML is that you can interact with XML data as you read it off the wire using the SAX parsing mechanism, rather than having to wait for the complete data to arrive before parsing it like JSON.

When dealing with huge datasets, this can result in improved performance and lower memory use.

There are at least two ways to add a backdrop image on your view, just like there are many other things in iOS coding: You can use UIColor’s colorWithPatternImage to produce a color for your view’s background. A UIImageView subview can be added to the view.

Because UIColor’s colorWithPatternImage was designed to create small pattern images that will be repeated, not large images, you should use a UIImageView if you have a full-size backdrop image. In this scenario, using UIImageView will save a lot of memory.

It’s critical to get your software up and running quickly, especially when a user is using it for the first time. For an app, first impressions are crucial!

The most important thing you can do to ensure that your app starts quickly is to use as many asynchronous processes as possible, such as network queries, database access, and data parsing.

Also, bulky XIBs should be avoided because they are loaded on the main thread. However, keep in mind that storyboards do not have this issue. So iOS app development companies can utilize them!

When designing an app, the most important thing to remember is that the user doesn’t see the code behind the app; all they see is content and design. When it comes to maximizing the user experience, the content layout is crucial.

Because one of Apple’s regulations is that material must fit the screen exactly, an iOS app development company must concentrate on the arrangement of the content. The transition between pages must be clean and simple.

The design must be intuitive and smooth. Make sure the images are properly aligned, and the fonts are the right size and style.

We’re all aware of the Apple device upgrades. Constant updates may have an impact on your app’s performance. As a result, it’s critical to create an app that works with all iOS versions.

Some folks may have an older Apple phone, while others may have the most recent Apple phone. As a result, compatibility is necessary for expanding your app’s reach.

Test the app before it’s released

An iOS app development company must always keep in mind that they should never deploy an app without first testing it. It is critical to test an app to understand its outcome, performance, and responsiveness.

Testing an app might reveal bugs or difficulties with the program, allowing you to address them before launching it.

“Automatic Reference Counting,” or ARC, was introduced with iOS 5, and it aids in the elimination of the most prevalent type of memory leak: forgetfulness. It takes care of your code’s release cycles for you. You won’t have to do anything manually using this.

Along with preventing memory leaks, ARC can boost performance by ensuring that objects are reassigned as soon as they are no longer required. ARC will improve the overall performance of your program if you use it in your projects.

The risk of executing all of your app’s work on the main thread is that it will become blocked, rendering your app unresponsive.

These are some suggestions you may use to improve the overall performance of your app during the development process.

Make sure the app is fluid and responsive before applying these suggestions. Spending time on performance optimization is pointless if the program isn’t developed correctly.

So, before jumping to these, identify the parts that require more features and concentrate on them. To get better performance, you’ll need a well-built application.

As an award-winning iPhone application development company, iWebservices help scale your business with Avant iPhone apps. With 11+ years of building bespoke technology solutions, we know what it takes to make your iPhone app featured on the App Store.

Looking for a reliable iOS development partner? Get in touch with us today to receive a no-obligation & comprehensive analysis of your app idea.