What Is the Process of Hiring Ionic Developers from India? 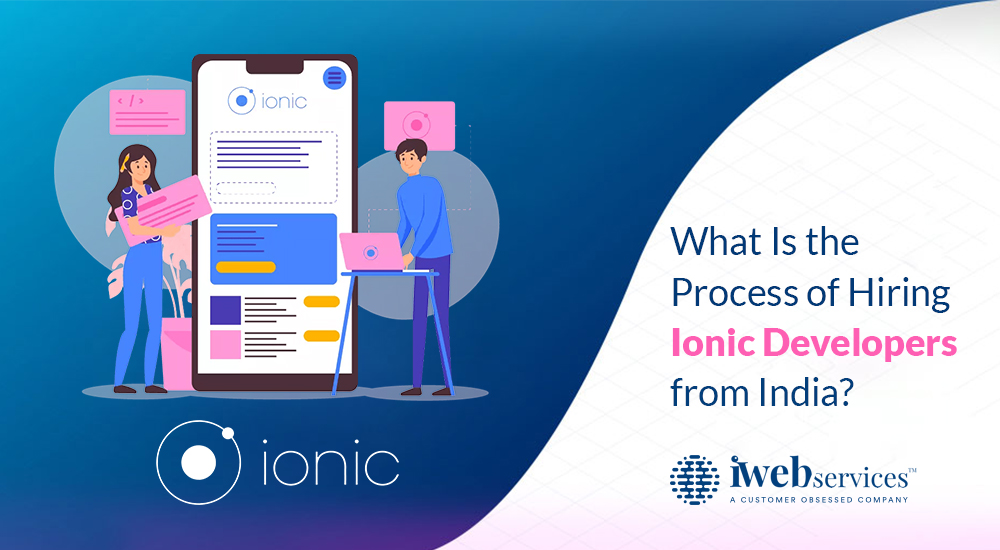 The Ionic framework promotes itself as being a cross-platform solution for mobile app development, with over five million apps produced with its SDK.

But there are drawbacks to anything nice. Native app development prioritizes specificity by definition. Native apps are designed to work on a limited number of platforms.

This means that if you want a mobile app to operate on both Android and iOS, for example, you’ll need two separate apps, two separate codebases, and possibly two separate development teams.

If you choose to take this path, be prepared for your spending to quadruple. If not, join the global developer community that uses Ionic in over 200 countries. Let’s look at what Ionic can do for you.

What Exactly Is Ionic?

Ionic is a Drifty-created HTML5 open-source mobile app development framework that was published in 2013. It focuses on HTML, CSS, and JavaScript, among other web technologies.

Ionic’s MIT license for both commercial and personal use in an open-source environment, according to Ben Sperry, one of three designers alongside Max Lynch and Adam Bradley, is the “proper method to give a framework.”

Drifty was created to bridge the gap between cross-platform mobile development and desktop development. Ionic has been a resounding success in the years since its inception.

Ionic is already used by over five million developers to create Progressive Web Apps that look and feel like native apps (PWAs). Through the shell of a web app, PWAs provide native-like app experiences.

Ionic’s earliest versions were built using AngularJS and Apache Cordova. These tools enable developers to create hybrid mobile apps, which combine the best features of both online and mobile apps.

At the time, one of JavaScript’s most popular frameworks, AngularJS, was used in conjunction with Ionic to create completely working mobile apps. Apache Cordova enables the use of the above-listed standard web technologies.

You can utilize Ionic freely without Angular or any other framework as of January 2019 with Ionic v.4 by modifying web components directly.

Advantages you get when you Hire Ionic Developers from India

To begin with, Ionic isn’t that tough to learn. This is due to the framework’s use of well-known web technologies that most web developers are already familiar with. Ionic developers will also be a relatively simple process as a result of this discovery.

Ionic, on the other hand, has a colossal amount of support. Because Ionic is both open-source and extensively used, there will always be someone or something nearby to assist your developer with their Ionic requirements.

Even better, developers can rely on a slew of features, bundles, and even whole services designed specifically for Ionic.

In terms of expenses, keep in mind that Ionic is cross-platform. You can use the money you save from only constructing one app to hire Ionic developer.

Furthermore, your developers can leverage their talents and knowledge to write Ionic source code that meets your business requirements.

What is the best way to find an Ionic developer?

We’re still here to assist those who choose to go the high road and hire ionic app developers on their own. Hiring a developer on your own is a very concentrated and hands-on procedure that necessitates a fair amount of software development experience in general.

You don’t want to entrust your hiring procedure to someone who lacks technical expertise. If you’re a non-technical manager interested in learning more about the hiring process, we’ve put up a wonderful resource for you.

What qualities should you seek in an Ionic developer?

Ionic developers should be able to do the following at a high level:

Why Should You Use Ionic?

Ionic is a cross-platform mobile development framework that is widely used around the world. Is it, nevertheless, appropriate for you? There are a variety of reasons why Ionic might be a good fit for your specific business goals if you’re a new tech company.

Open-Source and Free Software: Ionic is entirely free and open-source once more. Users of open-source software have access to and can alter the source code.

As a consequence, a product has been redesigned to meet the needs of an individual or business without imposing unnecessary limitations. This, of course, is free of charge to you.

Testing with Ionic is a breeze: Stimulator testing for iOS and/or Android can be done with Cordova commands. You can test on both a desktop and a mobile browser. Finally, you can run some tests on the platform to check how it works. Remote debugging is also possible with Ionic.

Popularity in the community has its advantages: Helpful Ionic engineers have been all ears to hear the cries of individuals in need via GitHub, Twitter, Slack, and its forum. Ionic is also linked to technologies like Angular and Cordova, which are both popular and provide similar community advantages.

For small and medium-sized enterprises dealing with minor coding challenges, a community can be a valuable resource. This goes hand in hand with easy-to-use testing software and open-source features.

What Are the Benefits of Hiring an Ionic Developer?

iWebServices Ionic developers are pre-screened, interviewed, and then taught to become actual software experts that can adapt to situations both within and outside of their general expertise.

At iWebServices, we hold our developers to a higher standard. Much like how elite special forces units recruit only the best from the main branches of the military, we recruit developers who either show amazing potential or demonstrate exceptional skill.