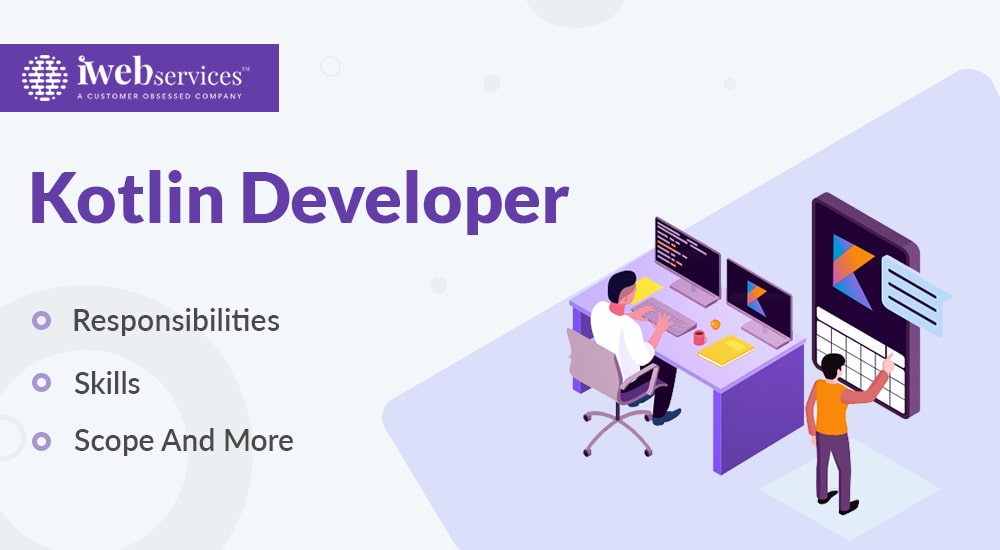 People believe that Kotlin will soon replace Java for Android app development due to its growing popularity. The android development community accepts and loves Kotlin, a modern-day, pragmatic, and cross-platform language.

Since Google stated that Kotlin is now its preferred programming language for Android, many programmers have switched to Kotlin to create Android apps. As a result, new job titles such as “looking to hire kotlin developer, India” have popped up. This article explains the tasks and responsibilities of Kotlin developers, as well as the salary, scope, and abilities necessary.

Kotlin is now the recommended language for developing Android mobile apps, according to Google. Over 70% of the top 1000 apps on the Google Play Store are considered to use it. Many app developers use Kotlin because it has better code safety features and allows developers to accomplish more with fewer lines of code.

Kotlin is presently being used for the backends of websites by 47% of Kotlin developers. This implies that websites like Google, Amazon, Shazam, and Gradle use Kotlin to manage their logic.

When it’s time to hire a Kotlin developer, there are a few things to keep in mind.

There are a few things to consider when looking at Kotlin developers for hire, including expertise, prices, and the type of work arrangement. It also relies on the project you’re working on and the talents you’ll need to finish it.

Here are some of the fundamental abilities that a Kotlin developer should possess:

Note: Kotlin Android Developers must have a strong understanding of Java because Kotlin is 100 percent compatible with Java, and as a developer, you’ll need to know Java at some level to develop Android apps.

Android Kotlin developers are mostly concerned with creating Android apps with solid backend integration. They are in charge of developing and maintaining Android apps from concept to release, as well as continuing product development.

What does it cost to hire a Kotlin developer

In the United States, the average income for a Kotlin developer is $127,500 per year. You can expect to pay $36.58 per hour on average when hiring a Kotlin freelancer. The hourly pricing for a Kotlin freelancer might range from $15 to $60 per hour, depending on the developer’s experience, location, availability, and other programming languages necessary.

What are the most crucial qualities to look for in a Kotlin programmer?

What exactly does a Kotlin programmer do?

Kotlin programmers create programs using the Kotlin programming language. Android apps are the most common, but they are not the only ones. They will be required to correct defects in current code and test new code before it is made public, in addition to programming, continuous development, and optimization.

Kotlin is a modern, open-source language that is fully compatible with Java. Google has shifted its focus to Kotlin for Android app development, and this has had a significant impact on Kotlin’s growth.

The popularity of Kotlin has soared after Google designated it a recommended language. Furthermore, it has a vibrant community dedicated to making it one of the most popular programming languages.

For a free no-obligation estimate of your mobile app, contact iWebServices, our experts have years of experience in developing mobile apps design and are always happy to help.